My daughter, Kelsey Jene, and I started off the Year 2011 in a very special way. We went to Israel as Baha’i pilgrims. So my next several posts will be my journal about the trip.

People of many faiths travel to Israel for reasons of the spirit. For Baha’is, it is a particularly loved and longed for journey to the Holy Land where so much of the early history of the Baha’i Faith took place in the late 1800’s and onward. 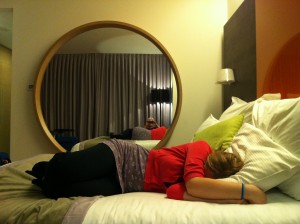 If you are Christian, Jewish, or Muslim, you may be thinking of Jerusalem, Bethelehem and other cities in Israel, and although these are recognized as significant cities in religious terms,  Baha’i travelers to Israel will be largely focused instead on the cities of Haifa and Akka.  Situated on the Mediterranean coastline about an hour north of Tel Aviv, Haifa sits at one side of the bay and Akka on the other.

Our journey began when we flew from Manchester, NH to Philadelphia and then to Tel Aviv. We arrived on Saturday, January 3rd, staying for one night in downtown Tel Aviv (Crowne Plaza) before taking the train to Haifa on Sunday evening. For the remainder of the trip, we stayed at the Haddad Guest House on Ben Gurion Street in Haifa.

After we got settled in our room in Haifa, we discovered that most of the rooms on the 3rd floor of our lodging were booked by fellow Baha’i pilgrims. The Roshan family (Ramin, Patricia, Elisa, and Devon) had two rooms. Margaret Rogers and her sister Laurie had another room, and a third room was booked by a sweet gentleman from Kenya who was joined by his two daughters who live in North Carolina (sadly, I can’t remember their names!). Each room opened into a common living and dining area, which is where we all gravitated to each night after we arrived back at the Haddad. Although we were in different pilgrim groups each day, this evening time when we all ended up back in our hotel allowed us to share our experiences from the day. It became a sweet ending to each day.

This entry was posted in Travel and tagged Baha'i, Israel, pilgrimage, travel. Bookmark the permalink.